Preview
The wizened warrior stares at you across the hearth. He begins to speak.

Seventy-three years ago they came. The Skulde barbarians broke through the Southern Wall like a tidal wave, crushing city after city. Armies were raised and then fell. The walls came down season after season, and before long it was clear that we had lost the Old World to the invaders. We rushed to the northern shores, terrified of the menace that burned away all that we held dear. So many died during that flight, but some thousands made it — crammed onto sailing ships, barges, or whatever seemed like it might make the journey north across the sea.

When those desperate flotillas landed, they stumbled onto land, praising their ancestors and their gods. Yet our elders today look back on those moments bitterly. For our grandmothers and grandfathers had leaped out of the fire into the icy bite of the iron wind in this new land. The winters are long, the soil poor, and the wind harsh. Little solace is found near the sea, where the razor-sharp rocks of the barrier islands crush unprepared fishing boats, and stories abound of worse dangers lurking beneath the waves, waiting to consume captains who are too prideful in their sailing. In the Hinterlands of the north or the Veiled Mountains of the west, we searched for the star-forged iron, but paid for it in blood — the Broken have little fear of us, and plunder where they can. And who can ignore the baleful eye of the Princedom of Alkergrund Forest, where those that get too close or make the wrong move are never seen again.

Yet for all of its dangers and discomforts, these shores have brought us something of the greatest value — life, and a future for our sons and daughters. Magic, considered a dying art in the Old World, is strong here, and there are whispers of children born with arcane gifts that promise greatness. Ever since our arrival, there have been hints of treasure here, gold and gems and artifacts left behind by a kingdom that ruled here once long ago, bright and beautiful, before the Princedom. Explorers come back from the deep wild with trophies from wyverns and tales of ancient crypts holding the knowledge of the ancients.

Despite what the chiefs will tell you, we are new to this land, and there is much to be discovered and conquered. You seem to me like one who has been marked to set out in this world, and fulfill your vows to your clan, your gods, and your self. This world will give you nothing for free, but it is upon this earth that we will make a new home for our people.

Some say the Princedom is ruled by more than a man. Some other evil guides its movements.

The Mask of the Hydra

The firstborn elves created wonders, and horrors. Some fell into the wrong hands.

The Words of Jan

Giants once ruled the land, they say. The last jarl laid a curse on it as they fell. Many wonder what it was.

It is said that the dead do not rest very easily here, but stories abound of ruins here from a time long ago.

Throne of the Rebel Queen

The seat of a monarch or criminal, messiah or demagogue, hope or fear. There is power here, but few dare approach it.

The nomads of the drift know neither farm nor cottage. Yet they sail through the northern icebergs, rich with secrets.

The Ironlands await. Who will heed their call?

The Ironlands is a tabletop roleplaying setting designed to be played with the Ironsworn RPG system, a narrative-heavy, quest-driven game. Ironsworn's core rules are free, and are available on the Ironsworn site. You can get the rulebook directly here. This setting was built for a guided playthrough of Ironsworn, but the world that it creates should work equally well for solo or co-op playthroughs.

This world shares some similarities with the default Ironsworn setting, but has some new elements.

The Princedom is the preeminent power in the Ironlands today. The people of the Princedom tend to keep to the inside of Alkergrund Forest, but their influence is felt from coast to coast. It is said the Princedom rose out of the ashes of a previous empire that once controlled the Ironlands. The Princedom is feared, in large part because of the capabilities of the High Coven, a group of witches supporting the Prince that have deadly control over shadow magic.

Some communities of varou in the Ironlands have moved on from disorganized tribes and created significantly larger-scale governments. In particular, three varou barons vie for power in the area around Valiveit, at the base of the Scythes mountain range. Whichever wins that struggle will have a mighty force of wolf-beings to command.

The fey beings that inhabit the Ironlands are given a wide berth by most. Legends abound about some that are much more powerful than the average sprite or dryad. An old tale tells of the Duke of the Moon, the offspring of a forbidden tryst between a moon-god and a faerie queen, who leads a band of revelers throughout the Ironlands to cause havoc and merriment. 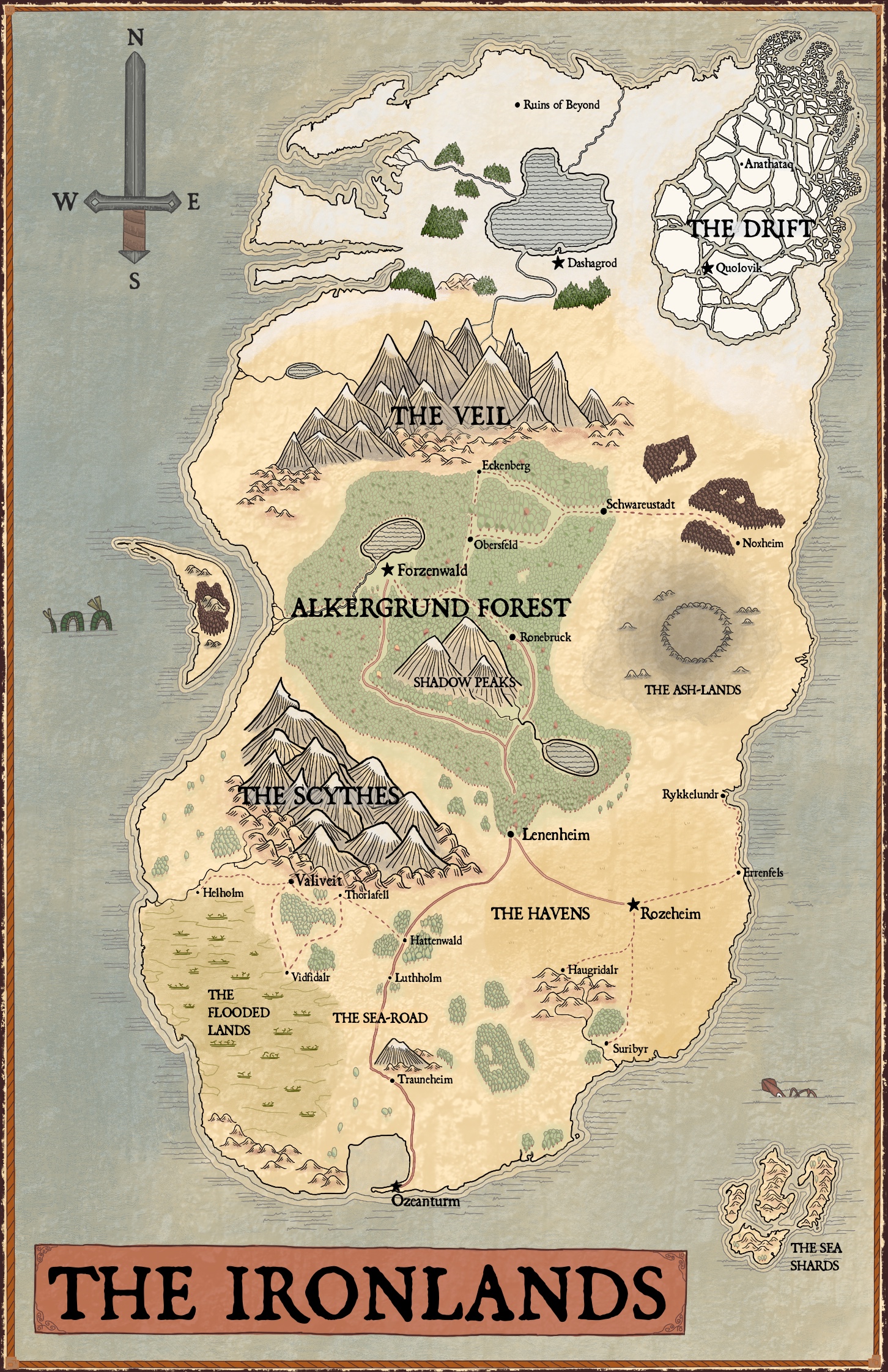 Throughout the development of the Ironlands setting, a number of tools have been created or found to facilitate play. These are recommended below:

Visit the Ironsworn Glitch to access a suite of die roll and oracle tools that will help your session. Thanks to the technology behind Glitch, it's also easy to remix this project and customize it to your game.

The community that created this particular vision of the Ironlands uses Notion to manage notes, keep track of play, and provide a convenient place to embed Glitch widgets. In the near future, a public version of the Notion page used to host this game will be posted here to inspire other players.

A well-known site in the RPG community, donjon.bin.sh provides useful random generators and tables to spark your imagination and produce the perfect name for that tavern.